Reducing RVP with the VRT-MAX

A major concern among oil producers today is maintaining their crude oil Reid vapor pressure (RVP) at transportable safe levels. 10 psia RVP or less is a common threshold that midstream and tankers set to protect their equipment and personnel. There are two major safety issues related to high RVP. The first is vapor pressure, which increases with temperature. The second is pumping cavitation, which occurs when the TVP (True Vapor Pressure) or bubble point vapor pressure reaches a V/L ratio around 0/1. This is caused by the acceleration of the crude oil, which leads to areas of low pressure. Once the pressure of the surrounding area (area around the crude oil) becomes lower than that of the crude oil, bubbles form, grow, and then bust. The bubble burst near the surface of the pipe or pump and this action releases a shockwave that may cause damage.

Reid vapor pressure is a common measure of a substance’s vapor pressure at 100oF (37.8oC). In other words, it is the liquid’s ability to volatilize. The RVP of crude oil increases with the increasing presence of flammable gases and other volatile flammable liquid components (e.g., hexanes).

OTA’s VRT-Max is a great solution to lowering RVP. The vessel is designed to MAXimize flash and simulate working and breathing losses that would otherwise occur at the storage vessel facility, possibly resulting in an affected facility status. The oil has time to stabilize at a minimum retention time of 30 minutes, ensuring that maximum vapor breakout occurs. 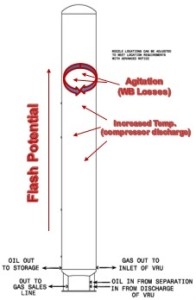 The HMR vary the stringency of requirements according to the degree of risk various substances pose in transportation. Many hazards, including the flammability hazard of liquids, are subdivided into three risk levels:

How can OTA Compression work for you?

We can develop a fully customized optimization plan
to help you save money and MAXIMIZE YOUR RESOURCES.