Let’s break this down and understand exactly what a vapor recovery tower is and how it can be beneficial to a tank battery facility. A VRT is a tall pressure vessel, which is installed between the production separator and liquid storage tanks. VRTs are a source for hydrocarbon vapor recovery at near atmospheric pressure that simulates working, breathing, and flash losses that storage tanks would normally cause with the added benefit of securing the storage tanks from the introduction of hazardous atmosphere (O2). VRT’s capture more product for a gas sales line and significantly reduces storage tank VOC emissions and ultimately save them from Quad O regulations, as far as the 6 tons limitation goes.

There are several benefits to utilizing a VRT, such as having less back pressure on your tanks. Another benefit is having manual tank gauging which limits emissions while the hatch is open and enhances safety to operators. VRTs keep air and oxygen out of gas pipelines by sequestering the vapors in the tower and eliminating the vapor containment potential common to atmospheric tanks.

Vapor Recovery Towers serve as the last designated pressure vessel to collect vapors from produced liquids to later be recovered and discharged into a sales line by a vapor recovery unit. VRTs insulate the VRU from vapor pressure surges and is more tolerant to higher and lower pressures. 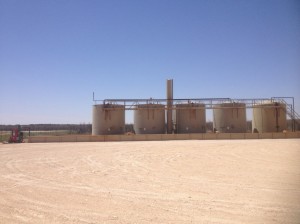 For increased flash gas production, utilize OTA’s VRT Max. A patent pending design that drives more flash gas loss prior to storage tanks. With this, it will reverse product flow for longer residency time, has a heated internal coil that recycles thermal energy from a compressor’s discharge, and has an agitator that simulates working/breathing flash losses. The VRT max also has pipework and downcomers installed on the inside, rather than the outside, which prevents radiant heat loss and makes for an ergonomic transport and setup.

As always, please don’t hesitate to contact an OTA representative to help you answer any of your compression needs.